Today’s Instant Pot Zuppa Toscana soup is one such one-pot wonder that gets ready under 30 mins with fewer ingredients that you’ll love.

Though “Zuppa Toscana” literally translates to “Tuscan Soup”, yet you’ll be mistaken if you imagine the traditional Tuscan Style Soup.

It’s loaded with crumbled Italian sausages, baby kale, tender un-peeled potatoes, a good does of half and half (for a super rich soup use heavy cream), a kick of red chili flakes and sprinkles of crushed black pepper.

A fantastic comfort food that’ll warm your soul all 365 days of the year.

Today’s Instant Pot Zuppa Toscana Instant Pot recipe will make you lick even the last drop from the soup bowl.

It’s damn good and even better than Olive Garden’s version.

Do you know that it’s also economical and easy?

Umm, we love this brothy Zuppa Toscana soup but if you prefer thicker soups thicken it with 1 tbsp corn starch slurry (Read NOTES).

You can even smash a few tender potatoes with the back of a laddle to give the soup a subtle thick body.

I have tried this pressure cooker Zuppa Toscana recipe with both Bratwurst Sausage and Italian Sausage (mild).

Both the sausages work great.

Same goes with the unpeeled potatoes, you can use russet potatoes, Yukon Gold Potatoes.

However, Idaho potatoes tend to mush up pretty quickly so I avoid using them in this Olive Garden Copycat Zuppa Toscana Soup.

You may use bacon in the recipe, crispy bacon totally face-lifts the whole Zuppa Toscana Soup.

I use it too but not in this recipe because I ran out of Bacon 😀 yes, I missed bacon badly but it was not that awful without it 😀

So what will you need exactly to make this Olive Garden Copycat Soup recipe work?

New Recipes EVERY WEEK for FREE!

Get access to a huge collection of AMAZING Instant Pot Recipes.

This boosts the flavor of the Zuppa Toscana Soup.

If adding Bacon fry it first and than brown the sausages in the bacon dripping.

Next, add the onion and garlic and saute for 1 min. Add chili flakes and oregano, mix well.

Pour in stock and de-glaze the pot really well so that there are absolutely no bits and crumbs stuck at the bottom of the steel pot.

CANCEL the SAUTE and close the lid of the pot, seal the valve and PRESSURE COOK on HIGH for 5 minutes followed by another 5 mins of NATURAL PRESSURE RELEASE.

Release the rest of the pressure manually, open the pot. TURN OFF the Instant Pot.

Add the half and half or full fat milk or heavy cream and mix well.

Allow the Zuppa Toscana Soup to rest for 2-3 minutes until the Kale wilts a bit.

How long is Zuppa Toscana good for?

Zuppa Toscana is good for 3-4 days in the fridge when stored in airtight containers.

Can Zuppa Toscana be frozen?

Zuppa Toscana can be frozen without the cream and the kale in it. Cream based soups tend to separate when frozen hence, I prefer not to freeze cream based or dairy based soups.

The potatoes tend to mush up too while re-heating the thawed soup and leaves a bad texture all together.

Can you reheat Zuppa Toscana?

Yes, you can reheat Zuppa Toscana either in the microwave oven or on the stove top.

The Kale will become softer when reheated.

How to thicken Zuppa Toscana?

Thicken Zuppa Toscana by adding corn starch or mashing a few tender potatoes with the back of a laddle.

Does Zuppa Toscana have dairy?

Can you make Zuppa Toscana with spinach?

Yes, you can make Zuppa Toscana with baby spinach instead of baby kale. It’s a good substitute.

Love Stews and Soups? Why don’t you try these AMAZING easy Instant Pot soups and stews from FOODIES TERMINAL? 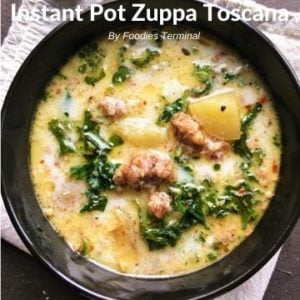 How to make Zuppa Toscana on the Stove Top?

Calorific details are provided by a third party application and are to be used as indicative figures only.
Nutrition Facts
Instant Pot Olive Garden Zuppa Toscana Copycat
Amount Per Serving
Calories 763 Calories from Fat 513
% Daily Value*
Fat 57g88%
Saturated Fat 21g131%
Cholesterol 122mg41%
Sodium 1230mg53%
Potassium 1362mg39%
Carbohydrates 34g11%
Fiber 3g13%
Sugar 5g6%
Protein 30g60%
Vitamin A 4847IU97%
Vitamin C 72mg87%
Calcium 222mg22%
Iron 6mg33%
* Read our privacy policy – Calorie information is provided as a courtesy only and should be leveraged as an estimate rather than a guarantee.Percent Daily Values are based on a 2000 calorie diet.