Posto Chicken is an ultimate Bengali dish that’s alien to perhaps the rest of India. Yes, it’s Chicken cooked with nothing else but just white poppy seeds paste which is the star ingredient for this Posto Chicken recipe.

Bengalis are Connoisseur Of Posto or Poppy seeds!

Today’s recipe of Posto Chicken is not any different. Though Chicken happily does not make it to our lunch table that often!

If a bong is given a choice he or she will always choose fish first, then mutton & unfortunately chicken will be a third priority! I am talking here about the Bengalis in general, there always an exception though 🙂

What is Posto Chicken or Posto Murgi

As the name suggests Posto Chicken or Posto Murgi is Chicken ( Murgi in the Bengali Language) slow cooked with a thick paste of Posto ( poppy seeds or  ).

A generous amount of extra virgin oil & a lots of fresh green chilies goes in the dish of Posto Chicken.

A robust dose of (a mixture of five whole spices) & dried red chili is what makes this dish much more fragrant & interesting.

Splashed with a handful of soft onions & drizzled with a generous dose of mustard oil this Posto Chicken dish is quite something.

The pungency of the mustard oil, the creamy, nutty flavor of dominates this recipe of Posto Murgi.

Its simple yet its authentic flavors enough to make you cook it more often.

Posto or poppy seed paste is variedly and abundantly used in Bengali cooking & proudly tops the chart of our comfort food category!

This Posto Chicken or Posto Murgi is so easy to make that it will engross you with it’s simplistic steps of cooking.

What is Posto – a short history

Did you know that this esteemed spice (Posto or poppy ) is a residual product extracted from the opium plant?

Posto crept into the Bengali cuisine along with an unpleasant history that’s so worth knowing.

Posto – an extraction from the medicinal plant Opium poppy which had the power to cure countless illnesses and heal people from within.

The medicinal properties of Posto or poppy find a mention in the Dhanwantari an ancient Ayurvedic chronicle written around 13th-century C.E.

Later during the reign of the Mughal emperor, Akbar, poppy slowly gained popularity as a recreational drug.

Also, the mysterious popularity of poppy did not just end as a recreational drug ! These tiny white seeds had so much more to offer!

How did Poppy take birth in the Bengali kitchen

The flourishing opium trade in China no longer remained a secret & was soon discovered by the British.

Soon after the battle of Plassey in 1757, the British settled in Bengal and made it as their primary base. Overnight they transformed the vast stretches of rural agricultural land in Bengal into Opium fields.

The regular crops feeding hundreds of families were stripped off and opium saplings took over.

The alarming opium agriculture forced by the British took over the then West Bengal. This, in turn, brought in Poverty & misery amidst the farmer families!

While the opium hiatus in Bengal continued stripping the western part of Bengal & the whole Chotanagpur plateau from regular agricultural produce. And transposing it into rolling fields of Poppy!

The wailing souls of the poor farmers’ wives began their search to feed their starving family members!

There were no crops, hence, no food. The forced cultivation of “Aphim” or opium completely ruined their lives.

The desperate poor wives began experimenting with the waste product (poppy seeds) of course after taking permission from the British –  this is how the so-called, P took birth inside the poor farmers’ kitchen.

It’s worth mentioning that the wives of the farmers transformed the poppy seeds into a paste & made their frugal meals complete!

With a generous dose of mustard oil, the was enough to feed an exploited poor farmers family during the British Raj in Bengal!

Posto, always a cherished & prized dish in Bengali cuisine, unfortunately, has an unpleasant history, it’s an accidental invention of exploited farmers wives in Bengal during the British Raj.

From the exploited farmers kitchen Posto spread far and wide all over West Bengal & even crossed the Padma river & entered East Bengal.

It transformed the facet of Bengali cuisine altogether & became an integral part in the regular menus.

Posto influenced the cuisine of Bankura, Birbhum, Burdwan & Midnapore and a huge part of the Chotanagpur plateau.

It even made a significant presence in the vegetarian platter of the sect of Nadia!

This tiny seeds of poppy play a pivotal role in our cooking. And we are just a little too scared to imagine even a single day without !

Whatever may be the ingredients a dish with  is always a winner! It’s tasty & pleases the palate with so much comfort & exuberance.

Bengali cuisine has a plethora of recipes starring as a star ingredient. We love to cook vegetables such as ridge gourd, pointed gourd, bottle gourd, cauliflower, potato with exclusively  & nothing else.

Posto even crept into the much ornate recipes of fish, meat & even egg! We relish every kind of recipes cooked with .  The experiments with “ banta” still continue & new recipes evolve with intricate tastes!

Posto boasts quite a bit of health benefits & here’s the list:

How to Serve Posto Chicken or Posto Murgi

Just don’t forget that extra drizzle of pungent extra virgin mustard oil before serving it & throw in a handful of chopped green chilies, enjoy that extra kick from the green chilies.

How long can you store Posto Chicken

I won’t go beyond 2 days in the refrigerator! The taste of the Posto or poppy seeds paste in the gravy gradually fades with time.

Posto Chicken tastes the best the day it’s prepared. Just don’t be tempted to cook a huge batch & plan to eat the whole week. Some foods are not meant to be stored long.

How to Cook Posto Chicken

Love quick Chicken recipes? Try out these awesome recipes from this blog

DID YOU TRY THIS RECIPE? Do not forget to give a STAR (*) rating. Just click on the stars on the Recipe Card below to rate! 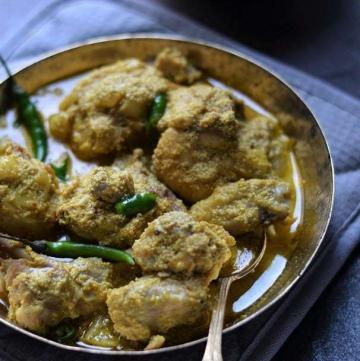 If you try this recipe or any other recipe from this blog, let us know! Leave a comment, rate it!  Hearing from you is what makes my Day!

PIN IT FOR LATER!