Instant Pot Apple Crisp is the easiest Instant Pot Dessert recipe that you can make with crisp fresh apples and common pantry staple ingredients. Enjoy it with scoops of vanilla ice-cream. Don’t miss the video & tips!

Apple Crisp in the Instant Pot

Apple Crisp in the Instant Pot is not only easy to make but also tastes amazing. It’s one of those dump and cook Instant Pot recipes that you can enjoy throughout the year.

You can make it with a wide variety of apples other than the tart granny smiths and enjoy it warm with scoops of vanilla ice-cream.

What apples are best for Apple Crisp?

In a clean dry bowl add the flour, rolled oats, brown sugar, spices and melted butter and mix well with the help of a spatula to resemble wet sand like consistency.

This will be the apple crisp topping. Set it aside.

Layer the crisp topping evenly on top of the diced apples in a single layer. Close the lid, seal the valve and PRESSURE COOK on HIGH for 6 minutes followed by Natural Release for 5 minutes.

Open the lid. You’ll find some amount of liquid gathered around the edges of the apple crisp. Don’t worry, that’s fine. Allow the crisp to rest for 5-10 mins, the extra liquid will be absorbed. Serve warm Instant Pot apple crisp with scoops of Vanilla ice-cream. Yum!

Can apple crisp be stored at room temperature?

Yes, apple crisp can be stored at room temperature for 1-2 days. Keep the container lightly covered with plastic wrap.

How long an apple crisp last in the fridge?

Apple crisp would last for 7 days in the fridge.

How do you store cooked apple crisp?

You can store cooked apple crisp in an air tight container, place a paper towel underneath the lid to absorb condensation.

How do you freeze apple crisp?

Store in portion control freezer safe containers. Thaw over night in the refrigerator and than re-heat in the oven at 350 degree F for 15-20 mins or in the microwave oven until warm. 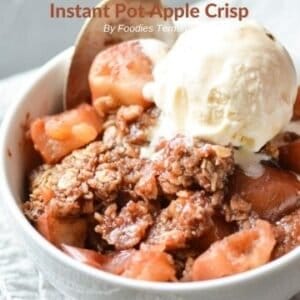 For making the crisp topping

How to make Apple Crisp in Instant Pot?

Calorific details are provided by a third party application & are to be used as indicative figures only.
Nutrition Facts
Instant Pot Apple Crisp
Amount Per Serving
Calories 275 Calories from Fat 72
% Daily Value*
Fat 8g12%
Saturated Fat 5g31%
Cholesterol 20mg7%
Sodium 8mg0%
Potassium 148mg4%
Carbohydrates 51g17%
Fiber 3g13%
Sugar 37g41%
Protein 2g4%
Vitamin A 277IU6%
Vitamin C 8mg10%
Calcium 34mg3%
Iron 1mg6%
* Read our privacy policy – Calorie information is provided as a courtesy only and should be leveraged as an estimate rather than a guarantee.Percent Daily Values are based on a 2000 calorie diet.