Learn How to cook Instant Pot Rajma Chawal Recipe | Pressure Cooker Red Kidney Bean Curry by following my quick Video Recipe. Cooking Rajma Chawal recipe in instant Pot is as exciting as it sounds. You will love this spicy kidney bean curry that’s cooked without onion & garlic! This Rajma curry also happens to be Vegan because I did not add ghee. If you are looking for a hassle-free quick weeknight meal try this Rajma masala along with some fragrant basmati rice at the same time in your Instant Pot.

A piping hot bowl of Rajma curry will be ready in less than 45 mins in your Instant Pot!

The above time might seem a lot, but beleive me you don’t have to baby sit the recipe at all!

Your Instant Pot will do the job.

We love to cook our no onion no garlic Rajma Masala in an Instant Pot, it’s easy, it’s quick & very convenient too!

What is Rajma Chawal?

Rajma Chawal is a popular comfort food hailing from the Northern States of India.

Though Rajma did not originate in India yet it’s a much-loved dish out here, and north Indian people never become tired of cooking & eating Rajma Chawal!

Rajma was introduced to the Indian subcontinent from Mexico.

Both these versions taste awesome & it’s difficult to say which one is the best!

The North Indian people always pair up their Rajma gravy with piping hot white rice with loads of ghee or butter & hence, the name Rajmal Chawal!

Today, I cooked the Rajma Chawal following the PIP (pot in ) method in my Instant .

I steamed the rice in a pot along with the red kidney beans!

The PIP method of cooking in an IP saves me a lot of time & effort & I can gorge into a complete meal in no time.

My steamed rice got ready while steaming the Rajma.

What is Rajma Masala?

The staple diet of the people of Punjab is a warm bowl of Rajma Masala.

An authentic Punjabi Rajma Masala tastes best with both steamed rice & or chapatis.

Can you make Rajma without soaking?

Yes, you can make Rajma without soaking in an Instant Pot or Pressure Cooker.

Sometimes we forget to soak beans because we lead busy lives & at other times we are a tad bit lazy!

Whatever may be the case, you can still enjoy your Rajma Chawal recipe or red kidney bean curry without soaking them at all!

Just so that you know it takes a bit longer to cook unsoaked beans!

But, the good news is that is not necessary if you decide to cook a fresh batch of no-soaked beans in your Instant Pot.

Do something else while the unsoaked Rajma gets cooked in your IP!

I love to either play with my 5 years old munchkin or read a book & relax while my Instant Pot does the job beautifully – Happy me!

What if my Rajma or red kidney bean is still hard after pressure cooking?

A few times you might find that although you followed the exact cooking time mentioned in this blog but still your Rajma is little firm!

By “little firm” I mean you can bite on it.

What do you do then?

Firstly, do not panic! It’s absolutely normal. It happens to me too because all kidney beans are not the same!

The time mentioned in this post is just a guideline from where you should begin because cooking times of red kidney beans depend on various other factors too!

Like the  of the Rajma or red kidney bean, their type or even the water that you used to cook them in!

For instance, if your tap water contains more calcium then your Rajma will need a little more time to get cooked.

If the red kidney beans packet is old they will need more time to get cooked.

So, all the above points taken into consideration if you find that your Rajma just needs a little more time in the Instant Pot then give them that extra 5-10 mins time!

You don’t have to do much, put back the lid, seal the valve & pressure cook on high for more 5-10 mins (as per your liking).

The pressure will build up in no time because the water is already hot.

If you want to read about how to cook various unsoaked beans, then, this is a good read!

Rajma or any beans needs some time to get cooked whether you decide to cook them pre-soaked or un-soaked!

If you really want to cook a super fast Rajma dish then grab a can of Rajma from your nearest supermarket & prepare a warm bowl of Rajma curry within mins.

You do not need to pressure cook them at all. Just saute them with the spices or bhuna add water & simmer for few mins!

Your Rajma Chawal or Rajma gravy will be ready in no time!

But with presoaked or unsoaked kidney beans you need to wait for your curry!

Though you don’t have to do much, it’s your pressure cooker or Instant Pot that will do the job of cooking the rajma well.

How long to soak Rajma or red kidney bean?

For today’s Instant Pot Vegan Rajma Chawal Recipe you need to soak the rajma or kidney bean overnight or 8 hours!

Wash them well before soaking.

Soak the beans with enough water over night! They will be nice & plump after 8 hours, all ready to be pressure cooked.

How can your store Rajma seeds or red kidney bean?

I love to store them in an air-tight container and keep them in a dark place, which is, of course, my kitchen shelf!

How long can you store Rajma Curry?

No onion & no garlic rajma curry keeps good for 4 days in the refrigerator when stored well in an air tight container!

I do not like to freeze this particular Rajma gravy.

What I love to do is that – I cook a big batch of soaked Rajma in my Instant pot for 35 mins on High pressure.

Bring them to room temperature & freeze them in zip lock bags for future use!

My life becomes a hell lot easy, I save so much time & enjoy a warm bowl of Instant Pot Vegan Rajma Chawal recipe every now & then. Thanks to my Instant Pot!

How Long should you boil Rajma?

If you choose to boil your presoaked rajma in a pressure cooker than give 6-7 whistles for melt in the mouth rajma. Wait for a natural pressure release.

In an Instant you have to pressure cook on HIGH for 30-35 mins for tender rajma. Wait 10 mins & do a quick pressure release.

If you decide to cook your rajma in a covered pot than it will take somewhere 50-60 mins to become completely tender.

Please note that the above timings work for me but it might not always work for you. You may have to increase the cooking time by 5-10 mins.

Because as mentioned earlier cooking rajma depends on the variety of rajma, the water & the age of the kidney beans.

Rajma and Kidney beans are they same?

Yes,  they are the same. Kidney Beans is known as Rajma in the Indian subcontinent!.

What are the health benefits of Red Kidney beans or Rajma?

Red kidney bean is one of the best sources of plant based protein.

Packed with nutrients a rajma recipe is certainly a wonderful nutritious choice.

Here’s why Rajma is good for health:

DID YOU TRY THIS RECIPE? Do not forget to give a STAR (*) rating. Just click on the stars on the Recipe Card below to rate! 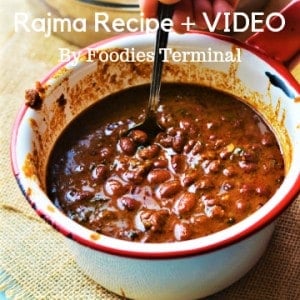 For the Chawal or steamed rice

PLEASE NOTE: Nutrition values are my best estimates. If you rely on them for your diet or special diet, use your preferred nutrition calculator.
Nutrition Facts
Instant Pot Rajma Chawal Recipe | Pressure Cooker Kidney Bean Curry
Amount Per Serving (1.5 cups)
Calories 120 Calories from Fat 32
% Daily Value*
Fat 3.5g5%
Saturated Fat 1.5g9%
Sodium 610mg27%
Carbohydrates 17g6%
Fiber 0.5g2%
Protein 5g10%
Vitamin C 24.8mg30%
Calcium 60mg6%
Iron 1.8mg10%
* Read our privacy policy – Calorie information is provided as a courtesy only and should be leveraged as an estimate rather than a guarantee.Percent Daily Values are based on a 2000 calorie diet.