Bengali Ghugni recipe cooked in Instant Pot is a Bengali snacks recipe that’s insanely easy to make & tastes delicious too. Cook this 10 mins Ghugni recipe in your Instant Pot & save lots of time. This Niramish Ghugni is cooked with dried yellow peas until just tender & in a mildly spiced broth-like sauce. Make this Ghugni recipe without Onion garlic with the simple ingredients from your pantry & warm up your evenings! I am sure that this Ghugni recipe Bengali style will always please your palate!

Refer to this amazing article for instant pot tips: https://www.corriecooks.com/how-to-use-instant-pot-as-slow-cooker/

Bengali Ghugni recipe rings so many bells right? Especially when you hail from West Bengal (an eastern state in India). This particular Niramish Ghugni dish is so much evident in a Bong household that it has become the essence of our food culture!

Ghugni recipe in Bengali style is a popular evening snack that satiates the evening  also forms an important part in every household as their morning tiffin or snack session! Oh! yes, come Bijoya Doshomi a bowl full of Ghugni Chaat is always welcome!

This mildly spiced dried yellow peas gravy is an evergreen staple and homogenously spreads its wings throughout the state of Bengal.

Traditionally Bengali Ghugni recipe is cooked in a “Dekchi”, an aluminum open pot or a traditional pressure cooker. When cooked in a “dekchi” it needs a lot of babysitting!

Yes, I know who has the time for it nowadays, life is busy! So, today I have shared the Instant Pot version of cooking a Matar Ghugni recipe! Taste is nowhere compromised but yes, you will save lots of time.

Ghugni recipe rules the staple diaspora of every Bengali household & heartily enjoyed as an evening snack or morning tiffin/snack.

Popularly served by the street vendors in a disposable “” leaves bowl (the same bowls you see in the pictures, came all the way from India) & garnished with generous amounts of chopped onions & green chilies.

Ghugni recipe Bengali style is also very much enjoyed with Puffed rice or Murmura or Muri in the Bengali households and it never goes wrong with Puris or Luchis.

What is Ghugni Chaat?

You can easily make Ghugni Chaat with this recipe. Just serve the hot Ghugni and top it with the above mentioned ingredients to create your own lip-smacking version of Ghugni Chaat.

What is an Instant Pot ?

Instant  Pot is the best-known multicookers in the market that makes cooking a breeze!

It helps to cook food without babysitting (the delayed timer is a fantastic feature), prevents spills, it’s a multi-functional kitchen appliance that helps cooking more manageable, efficient and fuss-free.

Instant Pot is a huge time-saving appliance that will definitely make your busy lifestyle so much easier!

If you want to find out some useful information regarding this awesome kitchen appliance then do click here & here!

It has been a long one year since we purchased our Instant Pot surprisingly I shared no Instant Pot recipes at all in the blog! Well, there’s a reason for it, guess what?

I just didn’t want to cramp this place waste your time by passing on my novice experiments! I needed some time to master the appliance, practice try create recipes that we loved! Now, that I am confident I will spam this place with Instant Pot recipes. So, stay tuned 🙂

What are the Ingredients for Bengali Ghugni Recipe In Instant Pot?

What is Ghugni Masala?

Ghugni Masala is a simple list of spices used to prepare the Ghugni Recipe.

Ghugni recipe Bengali cooked in an Instant Pot requires very few masalas. You can make this 10 mins Ghugni recipe without onion and garlic with your pantry staples, Like

How do you boil yellow peas ?

Add the soaked yellow peas with sufficient water to the Instant Pot & pressure cook for 3 minutes with the vent in the sealing position.

Do a quick pressure release after 3 mins.

How many calories are there in Ghugni ?

There are 117 calories in Ghugni.

For detailed Nutritional Info Please refer to the Nutritional chart / Calorie Card in the Recipe Card below.

What to serve with Ghugni recipe Bengali Style ?

Ghugni recipe Bengali Style is popularly served with puffed rice or  or muri in West Bengal.

Ghugni recipe without onion and garlic is also equally enjoyed with Puris or Luchis.

Nothing can beat Ghugni recipe Bengali Style taste when it’s served as such in a disposable “” leaves bowl and topped with chopped onions & green chilies!

How Long can you store Ghugni ?

Ghugni keeps well for 3 days when stored in an airtight container in the fridge.

Ghugni Chaat does keep good beyond that 2 days time, but honestly, I don’t like the taste!

When you need them just thaw, re-heat in the micro-oven and enjoy! If you decide to freeze just do not add the potatoes and do not garnish them with onions & chilies. You can always garnish later just before serving.

How to make Ghugni in Instant Pot? Step by Step

Step 3: Next, set the pressure cooker mode “on” and then set the time to 3 mins. as seen in the picture. You can increase or decrease the time with the “-” & “+” signs respectively! Close the lid and push the vent to the sealing position. It’s ready to pressure cook.

Step 6: Next, switch on the saute mode and keep the setting to normal.

Step 9: Add the cubed potatoes with skin on and saute for 1 min.

Follow the recipe mentioned in the Recipe card in this post to the T to make Niramish Ghugni recipe or Ghugni recipe without Onion garlic.

How to make Oriya Ghugni Recipe?

The rest of the Ghugni recipe remains the same!

How to make Ghugni recipe with coconut?

You may use fresh coconut slices or frozen.

You may also mix the shallow fried coconut slices with the Ghugni & keep aside a few pieces to garnish.

By Meghna For Foodies Terminal. 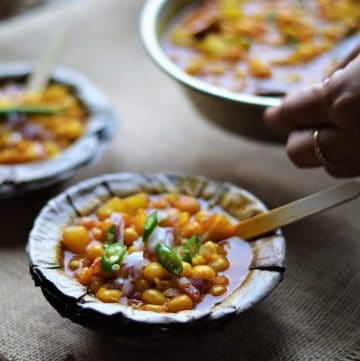