Tastes so good with rotis, rice, pooris or parathas.

However, if you don’t prefer bell peppers or capsicums with a slight crunch and vibrant green color, cook them slightly more until the edges begin to wilt.

I chose boiled small potatoes and diced them into halves.

You can also use regular potatoes and make them into quarters and add them directly to the Aloo Capsicum Curry without boiling them first.

In that case keep on roasting the quartered potatoes with the masalas until the potatoes are almost 90 % done.

However, using pre-boiled potatoes will save you time and it will also give you more power to not over cook the capsicums 🙂

I live that on you to decide.

Whatever method you choose to cook today’s easy potato capsicum curry it’ll always be your favorite because the flavors are outstanding and the process is beginner friendly.

No fussy ingredients and no complex steps.

Note: In case you are on a special diet you need to know that today’s Aloo Capsicum Dry Sabzi Recipe is Vegan and Gluten Free.

You can make a delicious Potato Capsicum Curry with these amazing handy tips and tricks.

Note: Today’s capsicum aloo recipe will reward you with Shimla Mirch that are crunchy & vibrant green in color. If you prefer nicely cooked Shimla Mirch than do increase the cooking time by all means.

How to make Aloo Capsicum?

Over medium high heat fry the capsicums in 1 tablespoon oil for about 2 mins. They should not wilt. Set them aside.

Add the onions and fry them until just beginning to turn golden from edges. Than add ginger garlic paste and fry until the raw smell disappears.

Step #4 Fry the dry spices along with tomato paste

Add the tomato paste and the dry spices and fry them well until oil begins to ooze out. Add salt at this stage.

Throw in the slices tomatoes and fry very well until they turn mushy and you see streaks of oil appearing. Also add the ginger and green chilies and mix well with the Bhuna masala.

Step #6 Mix in the aloo capsicum fry and garnish

Add the boiled potatoes and shallow fried capsicums and coat them well with the Bhuna masala. Fry for another 5-6 mins. Garnish with garam masala powder and kasturi methi. Give everything a good mix. Enjoy Aloo Shimla Mirch Sabzi recipe. 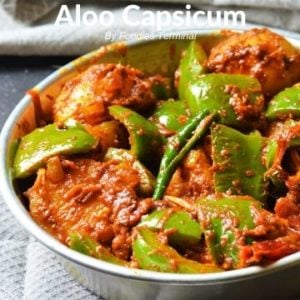