What is Chicken Corn Chowder?

Chicken Corn Chowder with bacon is a delicious thick, creamy soup made with whole corn kernels, boneless chicken, potatoes in a dairy based base.

Note: This post has been updated with reheating directions, serving ideas, leftovers and storage and frequently asked questions.

How to make Chicken Corn Chowder in Instant Pot?

Set the Instant Pot on SAUTE function & set it on HIGH heat. Fry the bacon with some olive oil until crispy. Set aside and drain the bacon fat if you do not prefer a greasy chowder.

Add butter and as it begins to melt throw in the onion and garlic and saute until the onion turns translucent. Throw in some salt to quick the sauteing process. Than, add the diced chicken and saute well until they become opaque.

This simple step will boost the flavor of the chowder almost instantly.

Now, add the chopped veggies (bell pepper & carrots) and give a quick stir. Pour the stock and de-glaze the pot very well scraping the sides and the bottom of the pot with the help of a spatula. This will prevent the BURN error.

TURN OFF the Instant Pot. Add the milk and the corn starch slurry. Hit back the SAUTE function & set it on LOW heat. Simmer the chowder to thicken it up.

TURN OFF the Instant Pot and add the cream. Mix well. Also, add the cheese and mix well until the cheese fully incorporates into the chicken corn chowder.

Do not simmer the soup after or while adding the cream and cheese. You might end up with a grainy chowder because the cheese and the cream might curdle.

How to thicken Chicken Corn Chowder?

You can thicken Chicken Corn Chowder the following ways:

Chicken corn chowder soup is quite heavy and you can make a meal out of it even if you do not accompany it with any side at all. However, you can serve it with the following:

Fridge: Instant Pot Chicken Corn Chowder should last for 4 days in the fridge. The chowder will thicken further. Always store it in air tight containers.

Freezer: Chicken bacon Corn Chowder can be frozen if you use evaporated milk instead of milk. Today’s recipe contains milk. If you want to freeze the chowder replace the milk with equal quantity of evaporated milk.

Microwave Oven: Thaw the creamy chicken corn chowder over night in the fridge and than re-heat over medium low stirring often. You may add splashes of stock or dairy to bring back the right consistency.

Stove-top: You can also reheat this soup in a heavy bottomed saucepan on the stovetop over medium heat. Stir the soup frequently to prevent it from burning. You can also add a splash of water, milk or cream before reheating the broccoli cheese soup. This help to thin out the fridge cold soup!

Can you reheat chowder?

Yes, you can reheat chowder in the microwave oven or stove top until warm or hot.

Can I freeze soup with potatoes in it?

How do you thicken corn chowder?

You can thicken corn chowder by using a thickener like all purpose flour or cornstarch. You can also thicken the soup naturally by mashing/pureeing some of the soup with a potato masher or blender.

Why is my chowder watery?

If you add more liquid than the chowder will become watery. If you do not thicken the chowder than you might end with a watery chowder. Also, the fats tend to harden when the chowder cools down. This may also make it temporarily watery. Chicken corn chowder with potatoes will regain its initial texture as soon as you reheat it either on the stovetop or in the microwave. Stir the chowder while it heats to quickly break down the congealed fats.

How do I make chowder creamier?

You can make chowder creamier by adding cream style corn, heavy whipping cream and also by thickening the chicken potato corn chowder with flour or cornstarch.

How do you thicken chowder without cream?

Use a thickener like all purpose flour or cornstarch to thicken chowder without cream. You can also puree a small amount of the soup in a blender, than add it back to the pot full of soup. This will help thicken the chowder.

I LOVE HEARING FROM YOU! If you try this best chicken corn chowder recipe, please let me know! Leave a comment and rate it below. I would love to hear how it turned out for you, or any changes you make. You can also follow me on Pinterest or subscribe our free NEWLETTER for new recipes every week! 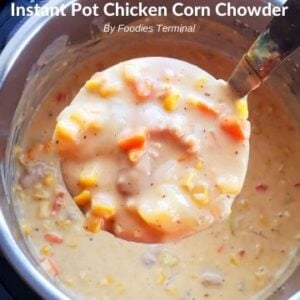 Calorific details are provided by a third party application & are to be used as indicative figures only.
Nutrition Facts
Instant Pot Chicken Corn Chowder
Amount Per Serving
Calories 711 Calories from Fat 414
% Daily Value*
Fat 46g71%
Saturated Fat 23g144%
Cholesterol 135mg45%
Sodium 493mg21%
Potassium 1123mg32%
Carbohydrates 56g19%
Fiber 6g25%
Sugar 12g13%
Protein 22g44%
Vitamin A 3961IU79%
Vitamin C 50mg61%
Calcium 215mg22%
Iron 2mg11%
* Read our privacy policy – Calorie information is provided as a courtesy only and should be leveraged as an estimate rather than a guarantee.Percent Daily Values are based on a 2000 calorie diet.