Soya Chunks Curry also know as Meal Maker Curry or Nutrela Curry is absolutely easy to make and tastes just like mutton or chicken when made right. Today’s Soya Bean Curry is made in the Instant Pot with pantry staples and tastes out of the world. You won’t make Soya Nuggets gravy any other way after you try this recipe!

How to make Meal Maker Curry?

Meal Maker Curry or Soya Granules Curry or Soya Bean Curry whatever you may call it, this particular protein loaded plant based nugget is absolutely delicious.

These cute soya nuggets when plumped up with hot water resembles the texture of meat, closely goat meat.

You just need a fabulous recipe to boost there flavor & make them as delicious as mutton or chicken.

Today’s Soya Chunks Curry recipe is just what you need, tender juicy nutrela nuggets that are chewy yet melt in the mouth soft doused in a gorgeous gravy sauce.

The dish is absolutely easy, made with pantry staples, just a basic masala base is what you need to begin with and it’s one of the easiest recipes I promise that will utterly surprise you with the intense flavors.

Oh man! it packs a punch and has the ability to fiercely compete with any meat dish.

Make it in the Instant Pot, regular Pressure Cooker or in a Kadai. All methods shared below.

Summary: Soya Chunks are excellent source of plant based protein, they are Vegan, vegetarian, gluten free and contains equal amounts of protein as meat. The most famous brand that sells high quality Soya beans in India is “Nutrela” hence, soya chunks are often known as Nutrela or Nutrela nuggets.

What is Soya Chunks made of?

Soya Chunks are made from de-fatted soy flour, it’s basically a by-product of soy bean oil extraction and are packed with equal amount of protein as meat.

Soya Chunks are also known as Soya Bean, Soya Nuggets, Nutrela Nuggets, Soya Granules. They are an excellent source of plant based protein and extensively used in Indian Meal preps.

Soya Nuggets can be as delicious as mutton or chicken and hence, it’s popularity is not restricted to vegetarians or vegans but stretches to meat lovers as well.

No, it’s not easy to make a delicious & simple recipe of Nutrela nuggets curry but, if you follow the tips below you sure can make the recipe one of its kind!

How to make Soya Chunks Curry? 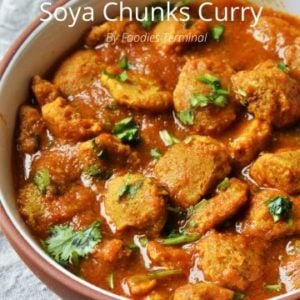 For the Masala Paste

Yes, Soya Chunks are vegetarian. They are derived from plant based soy flour and resembles the looks and texture of meat.

How do you cook dry soya chunks?

How long should Soya Chunks be soaked?

Soya Chunks needs to be soaked covered for at least 15 minutes in hot water.

Does Soya chunks have protein?

Yes, Soya Chunks have good amount of protein which is plant based.

Can soya chunks be eaten boiled?

Yes, Soya chunks can be eaten boiled. They taste best when boiled first and than made into a quick curry or any used to make any other recipe like Pulao, fry etc.

Is Soya chunks good for health?

Yes, soya chunks are good for health when consumed in moderation. They are good source of plant based protein and low in saturated fat content. Welcome to foodies terminal stop. I am glad you are here! As the name suggests you are in foodies paradise. This blog brings you recipes, from around the world, those have fascinated me with its flavor, appeal, and aroma. Each post is appropriately tagged for your easy navigation and recipe hunting. Be rest assured that you will find something to put on your dining table today! Read More…