Homemade Biryani Masala Powder Recipe is much better than the store bought ones. It’s easy to make, you can pick the best spices & make them in small batches. Learn to make the Best Biryani Masala quickly at home.

If you love making & eating Biryani at home you know how important it is to use a good Biryani Masala Powder in the recipe.

It makes a lot of difference in taste.

Similarly, a bad Biriyani Masala can easily spoil the whole recipe right away.

Some store bought masalas are overpowering & some are too faint.

Some smell very good with the first sniff but once they are cooked they taste totally different.

I had a tough time deciding on brands, exploring new Biryani masalas from the store, it was an endless marathon that always ended in utter dissatisfaction.

I have hit that sweet spot & began making my own homemade Biriyani Masala Powder with the best spices and I always make it in small batches for best flavor.

Since then I have completely quit buying the preservative-laden, old Biryani Masala Powders from the store.

Don’t be overwhelmed with the long list of ingredients for today’s recipe because that’s what will make the Best Biriyani Masala Powder.

And you’ll be praised for cooking the best Biryani in your block, people will ask for seconds 😀

Just follow the recipe & exact proportions to the T, use the best fragrant spices & follow the directions as mentioned on the recipe card below.

I know you are giving me that “LOOK” but I saw several recipes floating on the web stating an epic long-lasting (up to a year Biriyani Masala!).

Homemade masalas begin to lose potency beyond 2 months. If you want the best flavors to go for small batches.

What is Biryani Masala?

Biryani Masala is a fragrant, exotic & exquisite blend of spices that’s made by roasting and grinding a set of aromatic whole spices into a powder form.

You can than use it liberally to make Biriyani dishes like How to make Chicken Biryani in Oven, Mutton Biryani, Vegetable Biryani, fish biryani, Prawn Biryani or even egg biryani.

You can easily whip up a fresh batch of Biryani Masala Powder at home.

And if you have the right recipe you can make the Best Biriyani with the help of the Best Homemade Biryani Masala Powder.

Do not be overwhelmed with the long list of ingredients because the outcome is just so worth it.

An absolutely fragrant, warm, woody, earthy Biryani Masala Powder that’s not overpowering is exactly what you’ll get from today’s recipe.

Just follow the exact method of making it & the right proportions.

Never swap this for that & never skip any ingredient except just one ingredient – Aloo Bukhara. Skip using it if you can’t find it at the store.

4 Tips to make the Best Biriyani Masala Powder at home

Note: You may Sun Roast the whole spices. This will give you much better control and the spices will never be over roasted.

What does Biryani Masala contain?

What is the difference between garam masala and biryani masala?

The main difference between Biryani Masala & Garam Masala is the set of ingredients, flavors, smell & uses.

Though they share a few common ingredients but they taste completely different because Biryani Masala has a lot more ingredients.

The proportion of ingredients too vary.

In most recipes you cannot use Garam Masala and Biryani Masala interchangeably.

In Indian Cuisine Garam masala is used as a light garnish to infuse flavors whereas Biryani Masala is used only for making Biriyanis.

Though you can make Biryanis only with the help of garam masala but you cannot replace garam masala in the curries with Biryani Masala. It will completely taste different.

Garam Masala is more versatile whereas Biryani Masala has limited & specific use.

What are the ingredients used in Biryani?

The ingredients used in Biryani are as follows:

How is Mace used in Indian cooking?

Store the homemade Biryani Masala Powder right away after making the masala.
Use moisture free air tight containers to store the masala.
For best results store in a dry, dark spot preferably inside an opaque kitchen cabinet or pantry.
You can even pop the container in the fridge.

How long can you store Homemade Biryani Masala Powder?

You can store homemade biryani masala powder for upto 2 months in an air tight container that’s completely dry. You can pop the container in the fridge.
Any homemade masala powder recipe loses potency after 2 months. They do not go bad but the flavors begin to fade away.

Yes, you can freeze Biriyani Masala Powder Recipe in individual freezer safe containers or bags and extend its shelf life for upto 6 months. But, I do not prefer doing that, I always love making my fresh masala batches because this simple step guarantees best flavors every single time. 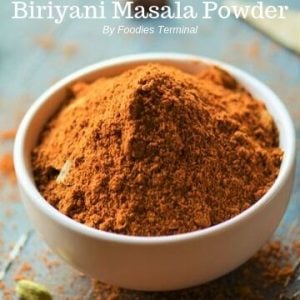 Homemade Biryani Masala Powder Recipe that's unbeatably good & much better than the store bought ones. If you love Biryani try making this Biryani Masala at home, it makes the most flavorful Biryani ever.

Calorific details are provided by a third party application & are to be used as indicative figures only.
Nutrition Facts
Biryani Masala Powder Recipe
Amount Per Serving (2 teaspoons)
Calories 18 Calories from Fat 8
% Daily Value*
Fat 0.9g1%
Saturated Fat 0.2g1%
Sodium 12mg1%
Potassium 70mg2%
Carbohydrates 3g1%
Fiber 1.3g5%
Sugar 0.2g0%
Protein 0.6g1%
* Read our privacy policy – Calorie information is provided as a courtesy only and should be leveraged as an estimate rather than a guarantee.Percent Daily Values are based on a 2000 calorie diet.

Pin it for Later!