Chicken Tikka in Oven knocks off any takeout Tikka Kebabs, packed with flavors, kids friendly & a freaking easy recipe. This is perhaps the easiest Chicken Tikka Kebab recipe that you’ll ever make in your oven.

Tandoori Chicken Tikka recipe consists of absolutely tender, juicy boneless chicken Tikkas marinated in an easy tandoori marinade and than skewered and baked. Perfect for a quick brunch, a great party food and an excellent appetizer.

Browse a variety of KABAB RECIPES from FOODIES TERMINAL.

You will love the mildly flavored, juicy skewered chicken pieces that happens to be kids friendly as well.

Carry these Chicken Tikka Kebab to potlucks, parties, enjoy it stuffed in Pita Bread, or relish it as an appetizer mopping it up with zingy sauces 😀

However, you can choose your favorite dips as well.

You need a few basic pantry staples to prepare the outstanding Tikka marinade because that is the only thing that will make your Chicken Tikka Kebab recipe one of it’s kind.

And as Tikka is always made with boneless meat go for either boneless chicken breasts or thighs.

Chicken Tikka is boneless chicken pieces that are marinated in a delicious Indian style tandoori marinade consisting of spices and yogurt, threaded on skewers and than baked or grilled.

Whereas, to make a chicken tikka Masala you need to prepare a base sauce and than cook the baked chicken tikka kebabs in that sauce.

Chicken Tikka is often enjoyed as an appetizer or a brunch.

Whereas, Chicken Tikka Masala is a curry form with gravy that’s often enjoyed as a main course dish.

The Kick-ass Tandoori Marinade is the crowing glory of today’s Chicken Tikka Recipe, make sure not to by pass any ingredient whatsoever

Prepare a Kick ass Tandoori Tikka marinade because that’s what will make these Chicken Tikka Kebabs outstanding and irresistible.
Use Hung curd or greek yogurt. It truly clings very well on the chicken surface without sliding off.
Squeeze out the excess juices from the onion but don’t make them awfully dry. The onion paste should be moist but not watery.
Don’t miss on the spice powders.
Marinate the chicken for over night or 8 hours for brimming flavors. If tight on time at least go for 2-3 hours marination. I won’t recommend that you settle for any lesser time.
Keep the cooked Tandoori Chicken Tikka Kebabs lightly covered. They will keep ultra moist and soft this way.

How to make Chicken Tikka in Oven? Step by Step

Step #1 Prep the Chicken and gather the ingredients

Cut the boneless chicken meat into 2.5″ chunks. Wash and pat dry the meat and store in a bowl. Add all the ingredients into the bowl.

With the help of a spoon or your hands coat the chicken pieces very well with the tandoori tikka marinade. Allow the chicken to rest in the fridge over night or for at least 2-3 hours before skewering them.

Thread the marinated chicken tikka in metal or bamboo skewers alternating with cubed bell peppers or capsicums and onion petals.

Prep a baking sheet by lining it with aluminum foil. Place a cookie rack and arrange the skewered chicken tikka kebabs. Bake at 375 F for 20 minutes changing sides midway and than BROIL on HIGH for 3-5 minutes depending on your oven. Serve them hot with chutneys and dips.

How to store Chicken Tikka in the fridge and the freezer?

Storing Chicken Tikka in the fridge or freezer is easy.

Choose an airtight container and store the cooked Chicken Tikka Kebabs for 7 days in the fridge.

If planning to freeze them than lay them on a baking sheet and pop them in the freezer until the individual pieces are all frozen.

Than store them in a freezer safe bag and store in the freezer for 3 months.

The individual pieces freezing technique will prevent the kebabs from clinging together and also you can take out as many pieces as you want for later use.

What do you serve with Chicken Tikka?

Chicken Tikka is mild. However you can make it spicy by increasing the amount of chili powder in the recipe.

Yes, Chicken Tikka Kabab are healthy as they are oven baked and not deep fried.

Chicken Tikka are boneless pieces of chicken that are marinated in a Indian style Tandoori marinade and than cooked in a clay tandoor oven (traditionally) or oven baked (modern day).

What is Chicken Tikka Kebab?

Chicken Tikka Kebab are juicy boneless chicken pieces marinated in a yogurt based marinade and than skewered with veggies like capsicums and onions and oven baked to perfection.

Can you make Chicken Tikka in advance?

Yes, you can make Chicken Tikka in advance and store it in the fridge or freezer for later use. In fact, a Chicken Tikka Kebab is a fantastic make ahead recipe.

You can re-heat Tandoori Chicken Tikka recipe in the microwave oven for 2-3 mins. You can also re-heat Chicken tikka Kabab in the oven at 350 F for just 6-10 mins. 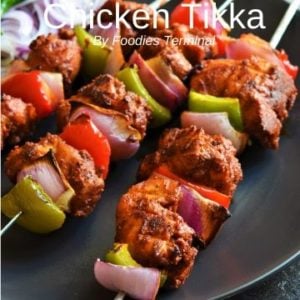 Chicken Tikka in Oven is easy to make. Also know as Tandoori Chicken Tikka or Chicken Tikka Kebab and these skewered Tikkas make an excellent appetizer for parties, potlucks and picnics. You can easily transform them into a complete meal as well.

How to make Chicken Tikka Kabab on Tawa or skillet?